How To AirPlay From iPhone To Mac Easily 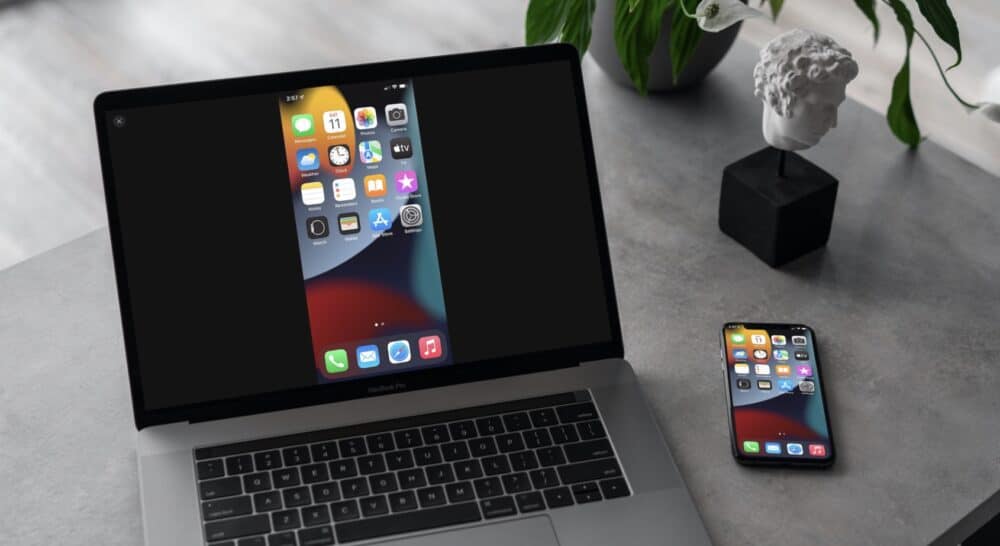 Apple revealed the new macOS Monterey during the recent WWDC 2021 event. One of macOS Monterey‘s most interesting features is the option to AirPlay from iPhone to Mac. This is how you accomplish it.

AirPlay From iPhone To Mac

Note that the newest version of macOS Monterey is now in Developer Beta. You’ll need a developer account to get macOS Monterey, but we’ve discovered a hack that allows you to install without one. macOS Monterey’s stable release is scheduled for this fall.

In case you’re unfamiliar, AirPlay is Apple’s proprietary wireless protocol. It enables you to cast your iPhone’s screen to another Apple device wirelessly. AirPlay is compatible with Wi-Fi, Bluetooth, and cellular data. However, it is advised that all devices be connected to the same Wi-Fi network to ensure a reliable connection.

Macs could previously only AirPlay to other Apple devices such as the HomePod or Apple TV. However, starting with macOS Monterey, Apple will let Macs function as AirPlay receivers.

This means that you may cast content to the MacBook and iMac from your iPhone, iPad, or even iPod Touch (assuming you have one of them). If you don’t have an Apple TV nearby, this lets you use the larger display and louder speakers on your MacBook.

By default, iPhones sharing the same Apple ID may now only AirPlay to a Mac. Therefore, if you wish to cast an iPhone from a friend or family member to your Mac, you’ll need to adjust the AirPlay privacy settings.

To accomplish this, log into your MacBook or iMac. To open Spotlight search, press Cmd+Space. Then, in the search field, type Airplay and click on Sharing when it comes in the dropdown menu.

READ:  How to Fix the Windows 11 VPN Not Working

At the bottom of the Sharing menu, you’ll discover the AirPlay Receiver tab, which has the Allow AirPlay for:

2 – Anyone on the same network

It is, by default, the current user. This implies that the device authenticated with the same Apple ID as the MacBook is limited to AirPlay functionality. The second option enables anyone sharing the same Wi-Fi network with your MacBook to AirPlay to it. It is preferable to select this option.

If you don’t have access to a Wi-Fi network, the final option is Everyone should be employed. This lets anyone in your vicinity to AirPlay to your Mac. 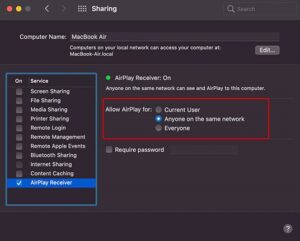 Well, Once you’re done with the AirPlay settings, change AirPlay privacy settings back to Current User.

How To AirPlay From iPhone To Mac

AirPlay is only compatible with a certain number of apps. In this guide, I’ll be using Apple Photos to AirPlay from my iPhone to my MacBook Air.

READ:  How to activate DisneyNOW on Roku, Smart TV, And more

After the setup is complete, you should see the identical image on your Mac.

AirPlay On Mac Has Some Restrictions

Once you approve the connection, the contents of your iPhone will be shown on your Mac. There are a few points to make here.

1 – During AirPlay, you cannot use your MacBook or iMac for any other task.

2 – The iPhone controls the playback. From the MacBook, you cannot control playback or media.

Apps That Are Compatible With AirPlay

AirPlay is supported by all major Apple apps, including Apple TV+, Apple Music, and Photos. AirPlay is also supported by popular third-party apps such as Prime TV, HBO Max, and Disney+. However, these apps are already available for Macs. If you’re feeling sluggish, you may still utilize the AirPlay case. Netflix and YouTube, on the other hand, do not support AirPlay and instead use Google Chromecast.

The Bottom Line: AirPlay From iPhone To Mac

With the launch of iOS 15 and macOS Monterey, Apple’s ecosystem has been closer than before while being as fluid and simple to use as ever. Apart from AirPlay, macOS Monterey includes Siri shortcuts for MacBook, a redesigned Safari, and Universal Control.